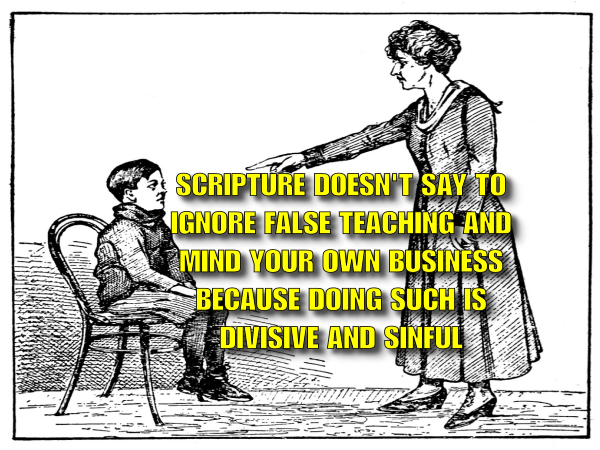 There is a myth in the church that false teaching is to be left unaddressed because it’s divisive and sinful. Some people might say to just ignore something if it’s not your cup of tea, and mind your own business because you’re causing division.

The thing about myths is that they are not true. Scripture clearly says addressing false teaching is not divisive, and it’s actually important and essential.

Paul told Timothy to address false doctrines. Paul didn’t say to ignore them because addressing them would cause division. Paul didn’t say ignore it, it’s just not our cup of tea. 1 Timothy 1:3-7

3 As I urged you [a]upon my departure for Macedonia, [b]remain on at Ephesus so that you may instruct certain men not to teach strange doctrines, 4 nor to [c]pay attention to myths and endless genealogies, which give rise to mere speculation rather than furthering[d]the administration of God which is by faith. 5 But the goal of our [e]instruction is love from a pure heart and a good conscience and a sincere faith. 6 For some men, straying from these things, have turned aside to fruitless discussion, 7 wanting to be teachers of the Law, even though they do not understand either what they are saying or the matters about which they make confident assertions.

It’s important to address false teaching because we’re told deception will come and attempt to lead people from the truth. We’re not told to ignore such because it may not be our cup of tea, or because addressing such will cause division. We’re not told to avoid this out of fear of “touching God’s anointed”.

But false prophets also arose among the people, just as there will also be false teachers among you, who will secretly introduce destructive heresies, even denying the Master who bought them, bringing swift destruction upon themselves.2 Many will follow their sensuality, and because of them the way of the truth will be maligned; 3 and in their greed they will exploit you with false words; their judgment from long ago is not idle, and their destruction is not asleep.

21 For then there will be a great tribulation, such as has not occurred since the beginning of the world until now, nor ever will. 22 Unless those days had been cut short, no [j]life would have been saved; but for the sake of the [k]elect those days will be cut short. 23 Then if anyone says to you, ‘Behold, here is the [l]Christ,’ or ‘[m]There He is,’ do not believe him. 24 For false Christs and false prophets will arise and will [n]show great [o]signs and wonders, so as to mislead, if possible, even the [p]elect.25 Behold, I have told you in advance. 26 So if they say to you, ‘Behold, He is in the wilderness,’ do not go out, or, ‘Behold, He is in the inner rooms,’ do not believe them. 27 For just as the lightning comes from the east and flashes even to the west, so will the coming of the Son of Man be. 28 Wherever the corpse is, there the [q]vultures will gather.

3 Beloved, while I was making every effort to write you about our common salvation, I felt the necessity to write to you appealing that you contend earnestly for the faith which was once for all handed down to the [c]saints. 4 For certain persons have crept in unnoticed, those who were long beforehand [d]marked out for this condemnation, ungodly persons who turn the grace of our God into licentiousness and deny our only Master and Lord, Jesus Christ.

Now we request you, brethren, with regard to the [a]coming of our Lord Jesus Christ and our gathering together to Him, 2 that you not be quickly shaken from your [b]composure or be disturbed either by a spirit or a [c]message or a letter as if from us, to the effect that the day of the Lord has come. 3 Let no one in any way deceive you, for it will not come unless the [d]apostasy comes first, and the man of lawlessness is revealed, the son of destruction, 4 who opposes and exalts himself above [e]every so-called god or object of worship, so that he takes his seat in the temple of God, displaying himself as being God. 5 Do you not remember that while I was still with you, I was telling you these things? 6 And you know what restrains him now, so that in his time he will be revealed. 7 For the mystery of lawlessness is already at work; only he who now restrains will do so until he is taken out of the way. 8 Then that lawless one will be revealed whom the Lord will slay with the breath of His mouth and bring to an end by the appearance of His [f]coming; 9 that is, the one whose [g]coming is in accord with the activity of Satan, with all power and [h]signs and false wonders, 10 and with [i]all the deception of wickedness for those who perish, because they did not receive the love of the truth so as to be saved. 11 For this reason God [j]will send upon them [k]a deluding influence so that they will believe [l]what is false, 12 in order that they all may be [m]judged who did not believe the truth, but [n]took pleasure in wickedness.