Bentley and people like him are out of touch. That’s a lot of money, and comparing suffering that’s the result of sin with suffering people face for being righteous is pure nonsense.

Missionary PaulyB might have to move in with his mom if people don’t send him $3000. He’s moving, and that costs money.

This is interesting because his ministry is built on doing miracles, greater than Jesus even did. Jesus multiplied the fish and the bread and a few thousand people were able to eat. You’d think a man who is so dogmatic about doing greater works could multiply the money in his bank account by speaking more into existence.

You may think this is harsh, but it’s not. Anyone following this guy should see the pure hypocrisy and failure to be consistent. Quit following and supporting this fraud. PaulyB if you’re reading this, please call upon Jesus for forgiveness. Close up shop and find something less deceptive to do.

You can get a taste of what he teaches by reading this entry.

There are a handful of verses false prophets often use to dismiss their false revelations. I want to prove that these verses do not mean a real prophet will be given an incomplete, misleading, or wrong revelation.

1 Corinthians 13:9 For we know in part and we prophesy in part; 10 but when the perfect comes, the partial will be done away.

Their argument is that since we prophecy in part and know in part, a word from God can be partial, and because of that, sometimes they’ll fail or be lacking. That didn’t mean God communicated incompletely when he gave a revelation, it meant sometime in the future we would have full revelation on all things.

If this meant a revelation from God could be wrong or lacking, then it would mean a Christian would never know if the revelation from God should be believed and followed. When God gives a word, he clearly reveals what is intended to be revealed. If he didn’t clearly communicate his intent, then there would be no purpose in listening and attempting to obey in the first place. This is just a lame attempt by false prophets to wiggle out of their deception.

1 Corinthians 14: :27 If anyone speaks in a tongue, it should be by two or at the most three, and each in turn, and one must interpret; 28 but if there is no interpreter, he must keep silent in the church; and let him speak to himself and to God. 29 Let two or three prophets speak, and let the others pass judgment.

1 Thessalonians 5:21 But examine everything carefully; hold fast to that which is good; 22 abstain from every [m]form of evil.

Also remember, these major apostles and prophets who declare their words for the world to hear are releasing them under the full assertion that it’s God speaking. They’re not passing it before a group for “testing” before they release it upon the church. They release them with full assertion that it’s a thus says God. So for them to backtrack after a major fail, and claim the verses above as justification for their fail, is total nonsense.

Every false prophet could escape being called out if these were valid reasons to overlook false prophecies. They could simply say, “Oh well, we do only prophecy in part. Well, you know, everything has to be judged, so that’s why I’m allowed to be wrong.”

God communicated clearly and fully when he intended to communicate and reveal. If he didn’t, then there would be no point in attempting to hear and obey. False prophets who release a word only to see it fail, are simply false and deceptive prophets. They can’t use the above verses to escape, deflect, distract, and excuse their failure.

On October 4, 2018 Charlie Shamp decreed and declared that from that day forward people would have total liberty and go from glory to glory. Link

Today is your your day of total liberty, from this day forward I decree and declare you are moving from Glory to Glory.

I guess that one didn’t take, because on October 17, 2018 he decreed and declared that all yokes of setback were broken. Link

I decree and declare all yokes of setback in your life are broken.

No evil, no enchantment, no manipulation, no divination, will hinder your Miracle any longer.

Apparently those previous two didn’t take because on October 22, 2018 he decreed and declared that your enemies were being consumed by fire, and every satanic stronghold against your life and family is destroyed now. Link

I decree and declare your enemies are being consumed by fire. Every satanic stronghold against your life and family is destroyed now by fire in the name of Jesus.

Why would he have to decree and declare all yokes broken if people were previously given total liberty and were going from glory to glory? If all yokes were broken, and no evil could hinder you any longer, then why would a declaration need to be made that would destroy every Satanic stronghold as it’s consumed by fire?

None of that makes sense. It’s as if Shamp knows it’s all nonsense, or he suffers from Decree Amnesia. 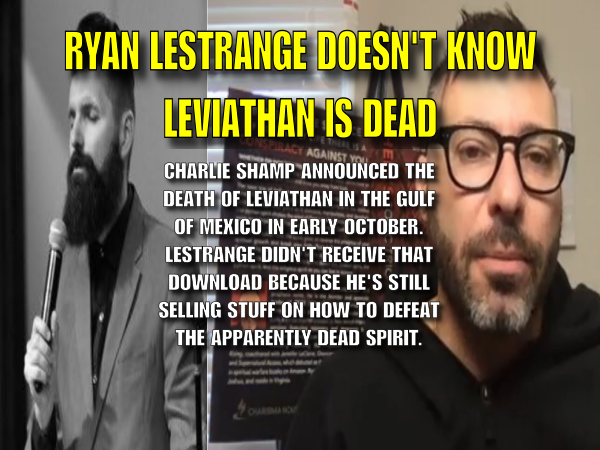 It’s really odd that Ryan LeStrange doesn’t know Leviathan met his demise in the Gulf of Mexico in early October 2018. LeStrange gets more downloads from heaven than most prophets we read in the bible. You’d think he would have received that download too, I mean it seems like he has the prophetic equivalent of Google fiber. It’s stupid for people to keep spending their money to purchase a book on how to defeat a spirit that’s already dead. 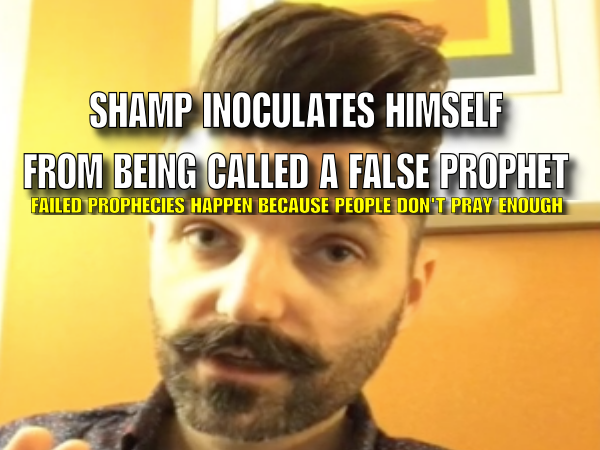 Charlie Shamp just inoculated himself from ever being accused of being a false prophet. Basically if something doesn’t happen it’s because people didn’t pray enough. If this excuse can be used, then we’re pretty much unable to label a prophecy as false. This is possibly a reaction to recent reports of two failed prophecies from Shamp. He said Hurricane Michael would be silenced (read here), and he said the Maine fishing industry would break records in 2017 (read here), and both prophecies were failures. Watch the video below. Click here if the video doesn’t load.

20 But the prophet who speaks a word presumptuously in My name which I have not commanded him to speak, or which he speaks in the name of other gods, m]”>[m]that prophet shall die.’ 21 n]”>[n]You may say in your heart, ‘How will we know the word which the Lord has not spoken?’ 22 When a prophet speaks in the name of the Lord, if the thing does not come about or come true, that is the thing which the Lord has not spoken. The prophet has spoken it presumptuously; you shall not be afraid of him. 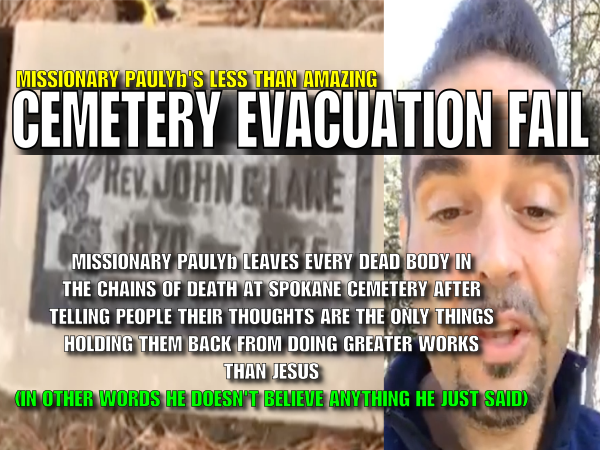 Missionary PaulyB was in Spokane, Washington and made a video from the cemetery where supposed healing evangelist John. G Lake’s grave is located. In the video he told his viewers that they could do greater things than John G. Lake.

He then told people they could be the next Jesus to walk the Earth, and they can do greater works than Jesus. He even said Jesus wants us to be greater than him. The only thing holding people back from that is their thoughts. After his lecture Paulb left every dead body in the cemetery in the chains of death. Either because his thoughts held him back from raising them all from the dead, or he doesn’t believe any of the nonsense he just said. Watch the video below.