Todd White recently posted a video where he addresses the heat Francis Chan took affirming him, and the heat Todd takes affirming Kenneth Copeland. During his speech White affirmed Copeland’s heretical doctrine about the power of human words, specifically that our unintended words may cause a tornado to form and come our way and cause destruction. Suggesting that if you simply say you were blown away, it might cause a tornado.

Human words are certainly powerful, but they do not have the power to cause tornadoes that come our way and cause destruction. Word of Faith teachers like Copeland distort scriptures about the power of words. Their distortion grants man the creative power that belongs to God only. The distortion also leads people into deception, paranoia, and superstition.

Check out these resources for further explanation.

Did you know a toxic colon can put a muzzle on the almighty God? Patricia King claims that after doing an extended fast that involved detoxing her colon she received clear prophetic dreams. She’s offering an extended program to help you detox your colon, and other parts of your digestive system, in the hopes that your health will improve, your system will get detoxed, and God will be able to speak to you again, apparently.

This whole thing is absurd. As if God can’t communicate because someone eats too much junk food. Maybe cessationists don’t receive direct revelation because their system is stuffed full of sugar and cheese?

On 09-11-2019 Benny Hinn Ministries posted a video to their Facebook page. These quotes from Benny Hinn are in the video.

“As you sow your seed you trigger prosperity.”

This is significant, because by 09-05-2019 there was a viral video of Benny Hinn claiming to have recanted certain aspects of the prosperity gospel, and there was a smidgen of evidence he was taking steps for his actions to match his words. You can read about that here.

###UPDATE 200 PM EASTERN TIME 09-05-2019. Hinn’s Facebook page, and his website have removed videos offering debt elimination for a seed faith offering. This is significant, because those videos were posted after his recantation. This may be a solid indicator that his recantation of the prosperity gospel message is for real, this time. ###

What should the hopeful, skeptical, and gullible think after the recent recantation? Given his past, I think it’s reasonable to be skeptical. All we can do is wait and see. Let’s see where Hinn is at after a month or so.

Also I actually just had to edit this entry before I posted it. Why? Because I had links up to videos on Benny Hinn’s Facebook page that were posted after his recantation. Those videos were offering debt relief if you sent his ministry money. Those videos were just removed, about 1:30 PM Eastern time on 09-05-2019. Maybe there is reason to be hopeful. 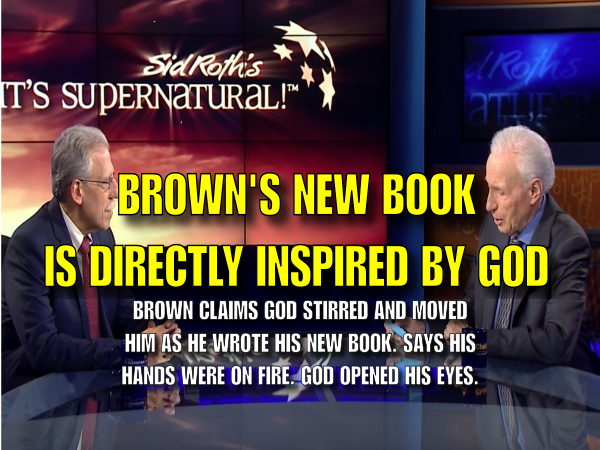 We need to listen closely to the narrative Dr. Michael Brown uses to describe how he wrote his new book. He’s trying to tell us his book is divinely inspired directly from God.

Dr. Michael Brown claims the fire of God literally came on him when he was writing his newest book Jezebel’s War With America: The Plot to Destroy Our Country and What We Can Do to Turn the Tide, when he was on Sid Roth’s show It’s SuperNatural.

He asserts that God opened his eyes to what is happening in the spiritual realm. He says God moved on him and stirred him, and it was like he got fire in his hands.

Dr. Michael Brown doesn’t want us to think this is simply a book he came up with on his own because of rigorous study and thoughtful conclusions reached using logic, reason, and scripture.

His narrative includes images of being stirred by God, and moved by God, and having his hands lit on fire, and God opening his eyes, because he wants people to think his book is directly inspired by God. Making such a claim is a dangerous and weighty thing. The implication of his narrative is that if you don’t believe his book, then you’re not believing God. Such an implied claim elevates his book up to the level of scripture.

Listen below. The clip starts about 30 seconds in.

At this point, people like Brown attempt to make a distinction between the inspiration they receive, and the inspiration given in scripture. They’re making a distinction without a difference. Anything asserted under divine unction carries the weight of God’s words. There aren’t degrees of inspired words. Words are either inspired, or they aren’t inspired.

This is once again a scary and dangerous low reached by Dr. Michael Brown. This places him closer to people like Joseph Smith.

Thinking about attending a supernatural school of ministry? Let me give you one helpful tip before you give them money for tuition.

They’re a bunch of hypocrites if they won’t pay your tuition. What do I mean? Hear me out.

John 14:12
Truly, truly, I say to you, he who believes in Me, the works that I do, he will do also; and greater works than these he will do; because I go to the Father.

Of course they should. You may be wondering what I am getting at.

Matthew 17:
27 However, so that we do not offend them, go to the sea and throw in a hook, and take the first fish that comes up; and when you open its mouth, you will find a shekel. Take that and give it to them for you and Me.”

19 Ordering the people to sit down on the grass, He took the five loaves and the two fish, and looking up toward heaven, He blessed the food, and breaking the loaves He gave them to the disciples, and the disciples gave them to the crowds,20 and they all ate and were satisfied. They picked up what was left over of the broken pieces, twelve full baskets. 21 There were about five thousand men who ate, besides women and children.

Why don’t these supernatural ministry schools simply multiply the money they have on hand? Why don’t they speak thousands of dollars into existence into the mouths of fish?

The first act of proving they can do greater works than Jesus, should be multiplying the money they have on hand, so they can cover tuition. Truth be told, they couldn’t even multiply one slice of bread to feed an extra visitor at lunch time.

Please save your money, and don’t give it to these money grubbing hypocrites. The only thing they’re multiplying is their own income. Dr. Michael Brown can’t bring himself to give an unqualified red flag to the likes of Ken Copeland, Benny Hinn, and Jennifer LeClaire. He affirms and promotes the likes of Heidi Baker and Sid Roth.

He claims to take his job as shepherd seriously, but in reality, he’s calling the wolves in for a feast.

Anything less than an unqualified red flag to the likes of those named above makes one guilty of shepherding malpractice. He asserts that he doesn’t have the time to call out every heretic. Even if that’s the case, he’s still guilty of leading people to the wolves.

If he doesn’t have the time to call out heretics, the least he could do is not lead people to them.

In this video around 1:33 he describes how seriously he takes his job as a shepherd in the body of Christ.

Even if we give him the benefit of the doubt, and recognize that he can’t call out every heretic, one problem still remains. He affirms, promotes, and leads people to some of the worst of the worst.

For example he’s pal and partner to Sid Roth.

He leads them to Heidi Baker!